A popular cross-culture food cart item which could be enjoyed by many immigrants (once carts had the facility to cook and/or keep warm and chill foods) from different Asian and African countries is the Kebab. (NOTE:  a kebab is a dish of pieces of beef, fish, chicken, goat, lamb and pork and/or vegetables roasted or grilled on a skewer or spit originating in the Middle East, later adopted in Central Asia and by the former Mongol and Ottoman Empires, before spreading worldwide.)

From Turkey (where the kebab supposedly originated) you have the Orman Kebabi (roasted lamb), Coban Kebabi (a shepherd’s-style roast of meat), Hacci Osman Kebabi (Kebab on a revolving spit), Koyun Kebabi (a whole lamb roasted in a covered pit) and Kefenli Kebabi (a unique kind of roast meat cooked and wrapped in bread).  And the lengthy list goes on.

According to a 2010 study the following nationalities (population by first ancestry of those who reported) found that 47.15 % of the population of Allegheny County (with German and Polish leading) and 41.93 % of Fayette County (again, with the same leaders) said their ancestors were from countries that were very familiar with eating kebabs so the kebab was a viable alternative for the food cart that could keep them warm and/or cook them.

As we in the US are generally familiar with beef or lamb kebabs with onions and peppers or gyros, these are just the most common and generic.  There are hundreds of kebab variations which include sauces, side dishes and more.

There are many that we might not be familiar with such as Rajpooti Soolah (from India which  is wild boar, deer or partridge barbecue kebabs made with a special "Kachari" or wild melon sauce) OR  Souvlaki (from Greece which consists of small pieces of meat, potatoes and sometimes vegetables grilled on a skewer. It can be served on the skewer or as a pita sandwich with garnishes and sauces such as Tzatziki or on a dinner plate with fried potatoes) OR the Doner Kebab adaptation (from Malaysia which consists of meat after being cut from the spit,  is pan-fried with onions and a hot sauce and then placed into a pita bread pocket before being filled with condiments such as tomatoes, mayonnaise, onion, and lettuce) OR  kebab (from Azerbaijan where the meat for the Tika Kabab, for example,  is  prepared in onion and thyme gravy and wrapped in Lavash which is a soft, thin unleavened flatbread made in a special tandoor oven with sauces like pomegranate syrup and other condiments) OR a Testi Kebab (from Central Anatolia region of Turkey and the Mid-Western Black Sea region consisting of a mixture of meat and vegetables cooked in a clay pot or jug over fire. The pot is sealed with bread dough or foil and is broken upon serving) OR Burrah Kebab (from South Asia and is made of marinated goat meat and charcoal grilled) OR a Jujeh Kabab (from ancient Persia which is now Iran consists of pieces of chicken first marinated in minced onion, lemon juice & saffron and grilled over a fire and served with grilled tomato and pepper). 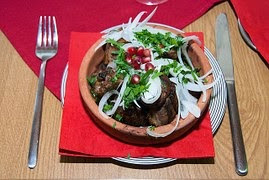 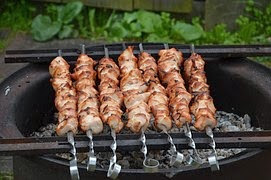 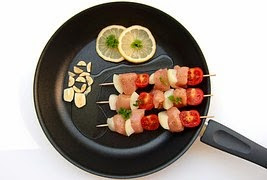 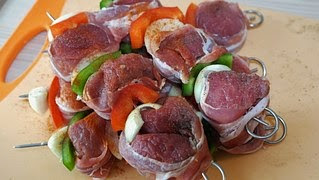 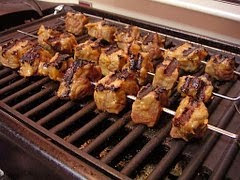 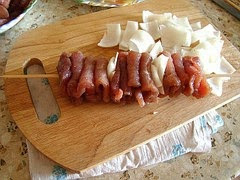 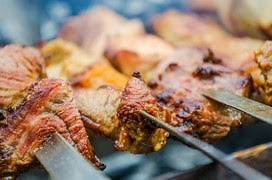 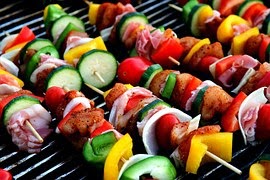 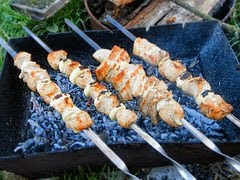 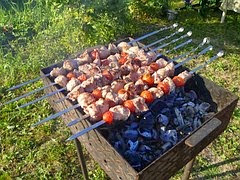 Posted by Internationalfoodblog.com at 1:12 PM No comments: